Al Zerwa Trading Co LLC (Rashidiya) was established in the early 2003 and is one of the leading stockist and suppliers of all types of Valves, Pipes, Pipe fitting, Hydraulic clamp, Hydroline products and all other Oilfield Items. Over the past years, we have developed our stocks and client in GCC in collaboration with major European & American manufacturers around the globe strongly supporting our organization with product support and special productions covering the complete range of piping materials. We have exported all our products on a large scale to more than 30 countries and regions and our high quality products and strong international reputation in industries related to the Oil & Gas & Petrochemical are highly valued by foreign customers.

Valves are widely used in industrial applications, plumbing appliances, plumbing fittings and household appliances. They are built to regulate the flow of liquid or gas through a pipe. There are three main types which include isolation valve, switching valve and control valve. An isolation valve is designed to operate in two positions which are the fully open position and the fully closed position. The switching valve operated in a three-way mechanism. It converges and diverts the flow of fluid in a piping system. The control valve’s main purpose is to regulate or restrain the flow of fluid in a piping system.

Valves need to be inspected periodically to ensure that they are free of cracks or abrasions. They are designed to be operated either manually or automatically. There are five main types of manual valves which are the ball valve, butterfly valve, globe valve, gate valve and diaphragm valve. Ball valves are well known for their rapid shut-off capabilities as they do not require multiple turns for opening or closing. They minimize the time involved in valve operation and reduce the probability of leakage. There are divided into two main types which are reduced bore and full bore. A reduced bore valve is best suited for pipes which are smaller in diameter. A full-bore valve is best suited for pipes that are larger in diameter and are specialized in minimizing pressure drop in the pipe. Ball valves are designed with a ring-shaped soft valve set which does not allow it to remain partially open. Butterfly valves regulate the flow of fluid using a disc-like element that is held in place by a rod which is pivoted in the middle. They are lightweight, simple construction and compact in design. In this system, the pressure easily drops due to its small face to face dimension. They are used to handle water, air, gas and applications with large pipe diameters.

Globe valves are used in a wide variety of applications like flow rate control and open-close operation. The flow rate control is done by lifting the valve plug to regulates the flow of liquid or air through the pipe effectively. They can be left in a partially open position as the valve seat is not prone to damage due to excess pressure. Some commonly used valves are clapper, check, choke, diaphragm, gate and globe, knife, needle, pinch and piston valve. Some popular locations to get in touch with valve retailers in the UAE are Silicon Oasis, Al Quasis Industrial area, Deira, Ras Al Khor, Rashidiya, Karama, Al Rigga, Umm Ramool, Mussafah Industrial Area, Industrial Area 5, Al Ghusais Industrial area, Al Khan, Jebel Ali, SAIF zone and Electra Street Abu Dhabi. 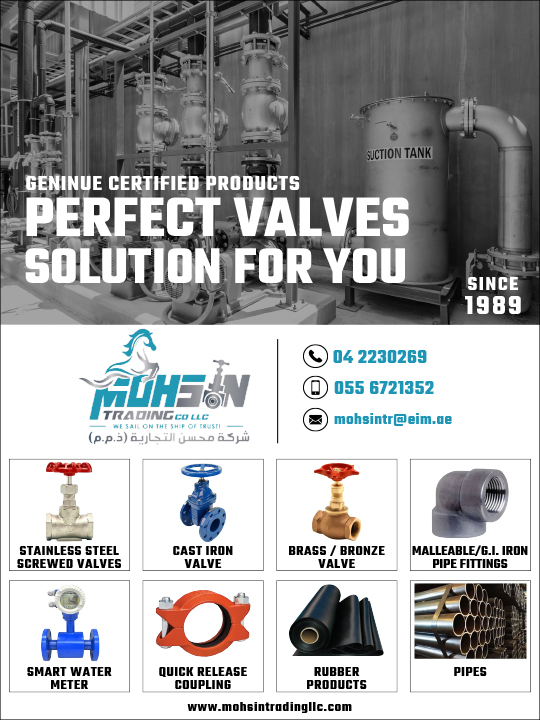